This strange image was captured using a polaroid instant camera, the photo was taken in June 1992 in Salem Virginia. The image is to the left of the photograph. Many people have remarked an uncanny resemblance to Charles Manson. The property where the house stands is reputedly haunted, residents who lived in the house have reported sounds of horses galloping down the driveway, sounds of furniture being moved across the floor and strange lights floating about the property. 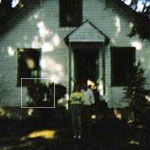 My great grandparents had the house built in the early 20th century and they use to talk about seeing a woman dressed all in white walking along the pathway towards the house. One particular evening both my grandfather and my great-grandfather saw this strange "woman in white" leaving the house and when they inquired to my great-grandmother who her guest was she informed them she had been alone all evening!

The day the photograph was taken it was a warm summer afternoon about two weeks after my grandfather killed himself, he was 82 years old. Of the four people present at the house "we" all to some degree or another experienced headaches, feelings of suffocation, and general discomfort. I personally felt like I was being watched by something unseen! My grandfather collected and tinkered with old radio's which he had strewn about one of the upstairs rooms when we tried to turn one of the radio's on there was nothing but static and suddenly a voice came over the airwave's that of a man that said "We are not alone".

The following comments are submitted by users of this site and are not official positions by yourghoststories.com. Please read our guidelines and the previous posts before posting. The author, Catsworld, has the following expectation about your feedback: I will read the comments and participate in the discussion.

I can see a few locations of where other people have stated ill email my picture to you if you want to see what I found email in profile page.

To the Author I'm pretty freaked by it I can see atleast 4-5 faces soundly in the image and have circled in my image.

All I have done is enlarged slightly in paint and magnified from there to x8, I enlarger the image 200% horizontal and 200% vertical.

Regards,
~Shadead.
jayhardyz (1 posts)
12 years ago (2009-12-15)
the images on the picture looks like an elf to me but these images are like shadowed so its hard to tell.
Hanbobs (20 stories) (119 posts)
13 years ago (2009-07-06)
Hi I just read your story and it sounds relly interesting ~ however... Did you notice your other 'friend' in the bottom window on the right? Neither did I until I saved your image and lightened it in Photoshop ~ I'm a Graphic Artist so I'm skilled in this area. And the face I see in this picture (on the left hand side) looks very similar to the one that appeares after I played around with the birghtness and contrast of your photo. I can send this to you if you like?

Hannah
clark_w_griswold (3 posts)
13 years ago (2009-05-29)
reading this, when I first opened it and saw the picture minimized, I got really scared, like I didn't even need to enlarge it at all.
But I did.
And I got really sick feeling and really scared.
So I began reading the first few lines after closing out of the picture, and couldn't continue.
I closed out and decided I would try again, reading it the second time, I sped through it unconsciously, not because the story is all that scary, just I felt like I shouldnt be reading it.
I had to keep my hand over the picture the whole time.

This story is really scary. Just the general feeling... I think it's a lot of that picture, although I haven't looked at it hard or long enough to see anything, I don't really want to. Lol. Good job.
ghostseer (41 stories) (408 posts)
13 years ago (2008-12-24)
Well, I have not read the story before examining the photo. As soon as I clicked on the story page above, I had trouble breathing, I felt like I was choking. Does this mean something to the Author?. I started to sweat, I felt ill, my head throbbed for about twenty seconds. When I sent the photo to my photo workshop, I saw two images immediately. To the left of the house. In the attic, I felt, rather than saw-another image. I think it is a young person about ten. There is a glow in the attic, but I think it is reflection of light. To the right of the couple?, I see a Guardian, he is standing very close. You probably cannot tell he is there, but I see him clearly. He is supporting the person on the right. Whew... Now I will go read the story...Blessings, Ghostseer
troyarn (5 stories) (479 posts)
13 years ago (2008-12-23)
I still see nothing in the photo that is strange. Perhaps I am missing something.
Tonith (1136 posts)
13 years ago (2008-12-23)
From what I could make out I must say it did look like the vintage picture (the most famous one) of Charles Manson. It's not a wonder your grandfather killed himself after being brought up by a monster of a father like your great grandfather. Must have been a lot of baggage there. I hope both souls find some peace. Sounds like one of them may not have left the house.
JrGhostHunter (guest)
13 years ago (2008-12-22)
Referring back at your comment, Catsworld, I think those ghosts might be from an indian tribe!
why don't you try some way of finding out, such as Ouija board or something?
KimSouthO (27 stories) (1960 posts)
13 years ago (2008-12-22)
I don't know about the Manson resembalance, but I do see a face. Wow! Gives me goose bumps.

Do you hae any other photos of this area around this house or in this house?

God Bless!
Jackets (3 stories) (71 posts)
13 years ago (2008-12-22)
Unfortunately, I can't see anything that can't be explained away as my mind's perception. I'm not saying that there is nothing in the picture, but I just can't see all of them. Maybe I could if the resolution was a bit clearer. Thank you for sharing though. I love checking out these types of pics.
rhodes68 (14 stories) (1596 posts)
13 years ago (2008-12-22)
Thanks Surya for coming back-I appreciate your insight!

To me, suicides are typically a good cause for a haunting, number one, the spirit has some unfinished business and number two, some faiths believe suicide keeps you away from heaven and number three, another spirit might be controlling all the others in the house. Either or, it comes down to one thing and that is, it is likely that you have a "few" spirits, some good, some not so good. Prayer usually helps, or blessings, exorcisms, cleansing and so on also helps with spirit problems.

I hope you find your answer in the comments from the many paranormal enthusiasts and experts. God speed and Merry Christmas!
Osa (1 stories) (70 posts)
13 years ago (2008-12-22)
Catsworld that is a really trippy photograph. When I enlarged it besides the obvious faces, I saw the dog. At first it appeared to be a kind of hound with prick ears that are rounded (sort of like a jackal) but when I returned to the photo with a magnifying lens, the hound disappeared into the background and there stood out the wolf, for a few seconds it looked like a mountain lion. Ghostseer is the professional photographer, maybe she could shed some light.
rhodes68 (14 stories) (1596 posts)
13 years ago (2008-12-22)
Not just a hound-it's a wolf... Reading Catsworld comment, I got chills down my spine. I wonder if the poster sees what we see.

Do you, Catsworld? Do you recognise any of the faces?
rhodes68 (14 stories) (1596 posts)
13 years ago (2008-12-22)
Yes, I also spotted the dog but I'm not sure if this is more than just shadows and shapes playing tricks. You mean the black and white hound, right?
rhodes68 (14 stories) (1596 posts)
13 years ago (2008-12-22)
Hey Surya. Apart from the faces I mentioned, if you look carefully inside the outlined space, there's another face looking at the "figure" the poster is referring too. I really have to wonder...
Catsworld (1 stories) (1 posts)
13 years ago (2008-12-21)
I called it the Suicide House because my Grandfather killed himself there in 1992. Many have commented about the photograph feeling evil. There is definitly evil in that house. My Great Grandfather was a mean man he crippled my Great Grandmother and he use to kill my mom's pets. Fortunately he passed away before I was born, We no longer own the house but it still stands today. My Grandfather found dozens of indian arrowheads on the property. The house is located in the same general area where the battle of hanging rock took place.
FRAWIN (guest)
13 years ago (2008-12-21)
I can see the faces but they are too easily explained away. The voice on the radio and the other phenomena you mention is interesting. It would be safe to say that you do have a ghost or two lurking in the house. Thank you for sharing your story with us, it was very interesting. Take Care.

On the left, right next to the outlined face,there's the figure (head, face and torso) of a blonde young woman. She has long wavy hair that she parts in the middle.

Right next to the man in the picture, look at the bright circular spot next to him. A few inches away to the right, there seems to be the face of a young boy!

I will ask Martin to highlight the spots if he can see them.

© The ghost story The Suicide House is copyrighted to Catsworld. Edited by yourghoststories.com.