Before I begin this story I should probably give some background about the place the ghost experience took place and about myself at the time.

This particular event happened around a year ago in Victoria, Australia at a well known asylum called Aradale Asylum and was pretty much where the 'loonies' who were too 'loony' for other asylums to cope with were sent to.

At Aradale's peak around 900 patients were kept there yearly and this is where some of the most horrific 'treatments' were tested upon these beings.

Now at this point you are probably wondering why on earth I would be stupid enough to go to a place like this and to be honest I can only pin point it to one thing and that is the beauty of peer pressure.

I went to the asylum with my best friend at the time and her family.

I was turning sixteen that year and after much persuasion and might I add a little manipulation she finally got me to agree for the tour to be a way to celebrate my upcoming sixteenth.

The reason why I was so reluctant was because although we both believe in the supernatural immensely I had personally been around said things during periods of my life and understood the power that they held unlike my friend who was naive to actual experience.

However in the end I agreed and we both made our way to the tour which began at 10:30pm and finished at 12:30am. 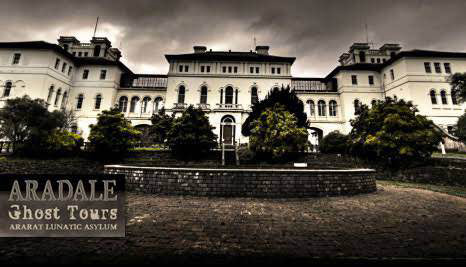 I will attach some photos hopefully to this document to try and capture the eeriness of the building itself although the pictures don't exactly do it justice, the place itself just seemed the leech out the colour of anything around it and was physically quite draining the moment you stepped out of the car.

At the beginning of the tour we met our guide for the evening and being a nervous wreck that I am I tried to ease the tension and complimented the guide's amazing knee length boots and he simply glanced at me like a rotten fruit however I was too strung up to mind.

The guide then proceeded to explain that six lanterns were going to be given out by him to certain individuals to hold and spread themselves through the group and looking around I realized that me and my friend were the youngest in the room by at least ten years.

As the guide slowly handed them out he finally stopped at the very last one and explained that the lamp he was holding was going to be given to the person who must stay at the back of the group the entire time and close any doors that the group moved through.

By this stage I was standing behind quite a large man and could barely see over his shoulder so it was certainly a surprise when the man was suddenly gently pushed aside to reveal myself and to then be given the lamp that I very quickly grew to fear.

I will not cover each room in this article simply for the company's sake, (wouldn't want to ruin it for any of you future visitors, although I don't recommend doing so.)

But I will mention two rooms which held the most importance to me the second being the greatest.

The first room I will mention is the storage room which is at the very bottom floor of the settlement practically a basement with shelves lining the walls and cold stone steps leading down towards it.

During the guides speech I felt no particular energy or emotion up until the moment he directed everyone back up the steps to leave.

I of course had to wait until everyone had scurried up the steps before I could take mine and this was always the most stressful time as I simply watched everyone disappear around a bend or in this case reach the top of the staircase and it always seemed to take longer than necessary.

Once everyone had finally reached the top I began my journey upwards, however as I planted my foot on the third step I felt a hard poke into my shoulder and out of instinct I quickly turned my head only to be faced with pure darkness.

Not wanting to investigate further I simply turned on my heel and jogged up the steps, slamming he door behind me.

Although that first experience may sound bland I assure you that it certainly wasn't at the time and this second experience would have to have been the most terrifying event to have ever taken part in my life.

Nearing the end of the tour we entered the 'surgery room' which held two doors at the opposite end to hold the next patients and a steel surgery table in the centre of the room.

As everyone entered the room the all stood in a semi circle surrounding the table while the guide explained the history.

Being the last person to enter I stood at the back of the group next to my friend and peered over the heads of the annoyingly tall companions although to this day I cannot remember a single word he said due to my focus being stolen by someone else.

Halfway through the speech a bat suddenly appeared out of no where and begin flying through the stale air and of course everyone suddenly got distracted and followed its path with their eyes, even the guide seemed transfixed, all except me.

One thing I'd like to note is that when I think back to this event things get a little hazy and most were filled in by my friend upon a later date so if it seems a little confusing this is the reason why.

The moment I entered that room a heat gripped me, I felt sweat run down my body and a coldness spread throughout my limbs.

It was a feeling which is unexplainable but if I had to compare it to something then I would compare it to nothing short of death. (Dramatic I know.)

When I walked into that room my eyes without my command suddenly latched onto the corner right beside the door we walked through to enter and only recently have I been able to make out what I saw.

Crouching in the corner with a grim expression aimed directly at me was a man, a man with no particular striking physical traits but the effect he had of me was catastrophic.

At this point I blacked out entirely and my friend informed me of the following information.

I walked in with the group trailing behind and stood next to my friend but she claimed that I constantly checked over my shoulder with my face deathly pale.

At one point she had asked if I was okay and she told me that I had replied with a string of mumbled words which she couldn't make any sense of.

When the bat was flying my friend was as distracted as the rest of them and she said that it was only a few seconds before she felt something amiss.

However as she turned to me to tell me about a hopeful spiritual moment she found that where I was standing was suddenly empty.

My friend exclaimed that she didn't know what got into her she just suddenly got filled with this desperation and fear and knew that she had to find me and that she only had a few seconds to do so.

She spun around the check outside the door but realised there was no need because I was slowly backing into the corner that I had seen the man in and was barely three steps away from reaching my destination.

She said that I had my head down and wasn't saying a word I just had my eyes wide open and was shaking.

Reacting on impulse she quickly grabbed hold of my arm and tugged me forward which seemed to break my out of my daze.

At this point my consciousness returned and I remember feeling unbelievably dizzy, in the entire time we were in that room the only words I heard the guide say was near the end when he said "we have had in the past women faint in this room and it is vital that if you feel that you are going to then leave the room immediately" but being me I didn't want to leave the room because I held the end of the line lamp and refused to give up the duty.

This all happened in a span of five minutes and as everyone walked out the room I stood there last and remember staring at the open door and then glancing at the corner.

The man in the corner beckoned me forward and I felt a slight tug but I also felt driven and without glancing back I walked straight out the room and slammed the door shut.

It wasn't until we reached the end of the hallway that I realised that I had a blood nose and as we walked out the hallway door I felt one final tug that caused me to stumble before the dizziness faded and everything became clear again.

This experience was like none that I have ever had before and I never want to have it again.

Never have a felt so threatened, whatever was in that room desperately wanted me and almost had me through a brief lack of focus and if it wasn't for my friend then God only knows what would of happened.

This article was written with one message that I hoped to install into any reader and that is that if you do plan to go on any ghost tours or any event that involves paranormal activity then I beg of you to bring others with you!

This should not be an individual event and should be treated with caution and awareness because you never know what could happen when the situation is out of your grasp.

The following comments are submitted by users of this site and are not official positions by yourghoststories.com. Please read our guidelines and the previous posts before posting. The author, kaitlin406, has the following expectation about your feedback: I will read the comments and participate in the discussion.

© The ghost story Tour Of Terror is copyrighted to kaitlin406. Edited by yourghoststories.com.